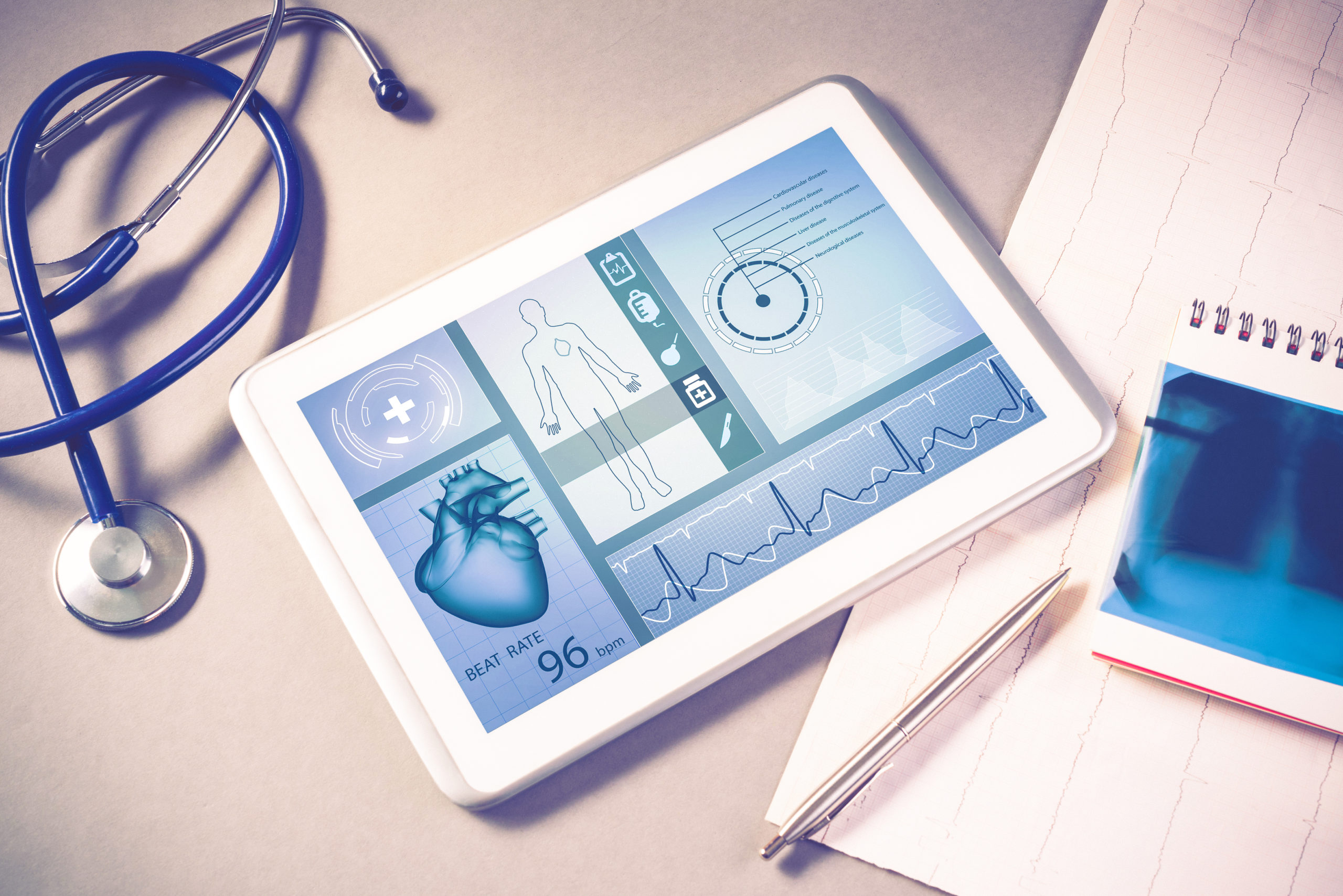 This is the third in a series of three articles directed at all innovators using artificial intelligence to solve problems in healthcare.  Our aim is to address some of the misconceptions we frequently hear around the protection of AI-based HealthTech inventions and to provide some practical guidance on the steps that should be taken to secure protection that supports your commercial aims and the wider adoption of your technology.

Part 1 of this series identified the kinds of Healthtech AI innovations that can be patented and part 2 discussed the considerations in developing a coherent IP strategy to secure the strongest protection to support the scaling of AI-driven technologies in healthcare.  This final article in the series examines some of the current trends within Medtech AI innovation, as reflected in the patent filing statistics.  We also provide a case study, looking in detail at the patent filing strategy of one of the companies who were awarded funding in the AI in Health and Care Award issued by NHSX.

In October 2020, MedTech Europe released a report on the socio-economic impact of AI in healthcare.  The report found that AI has the potential to both save hundreds of thousands of lives annually, and also save hundreds of billions of Euros annually by reducing the cost of healthcare.

The promise of these potential returns has driven an unprecedented focus on innovation in this area, with new machine learning approaches being applied across almost all areas of health and care and a large number of new companies being formed around these new technologies.  With increasing competition, many of these companies look to IP, and in particular, patents, to gain an early foothold in the market by securing foundational IP in their new applications of AI in health care.

The rate of innovation and importance of securing early protection for these new approaches has led to rapidly increasing numbers of new patent filings to AI-driven HealthTech technologies, with worldwide patent applications accelerating from around 2010, to a stage where, in 2019, there were over 28 new filings per day for HealthTech AI inventions. 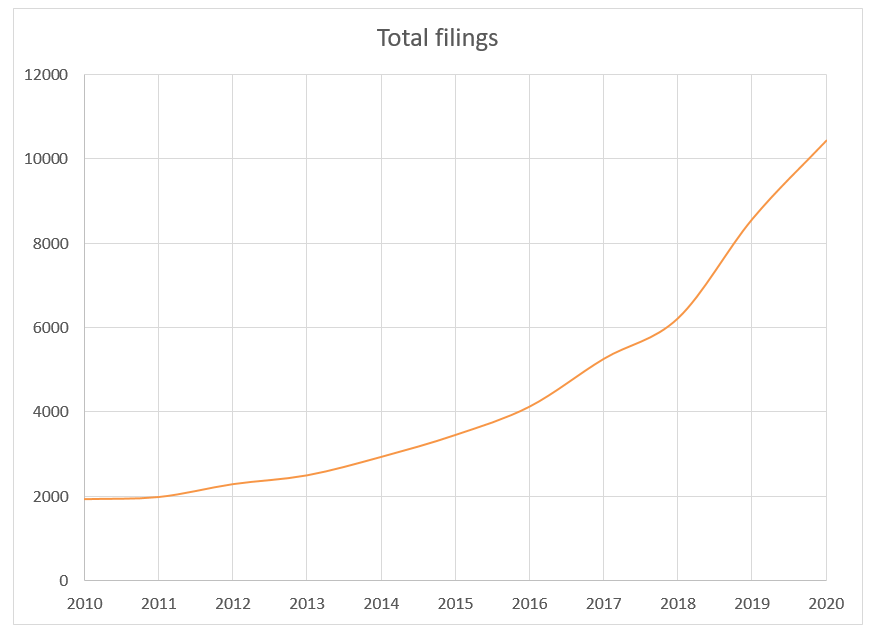 This growth has been expressed across a range of medical technology sectors throughout the healthcare process, from wearable tech and health assistant apps, through to surgical robotics.  The largest of these sectors is medical imaging, with over 1800 filings in 2019.
This likely reflects the fact that this sector presented relatively “low hanging fruit”, given that ML-based image processing techniques were relatively mature compared with other areas and there were a wide range of possible applications of such techniques to different types of medical images.  The relatively short timescales required to develop a new viable ML-based image-processing product likely drove investment and an early focus in innovation in this area, when other applications of machine learning were still in their relative infancy.

The below graph shows the percentage growth since 2010 for six HealthTech sectors.  Another notable sector is the use of AI in surgical robotics, where patent applications have increased by 1500% since 2010 and a particular uptick in filings can be seen from 2018 onwards.  The increase in patent filings relating to AI in medical imaging indicates a continuous steady growth despite the field being relatively mature. 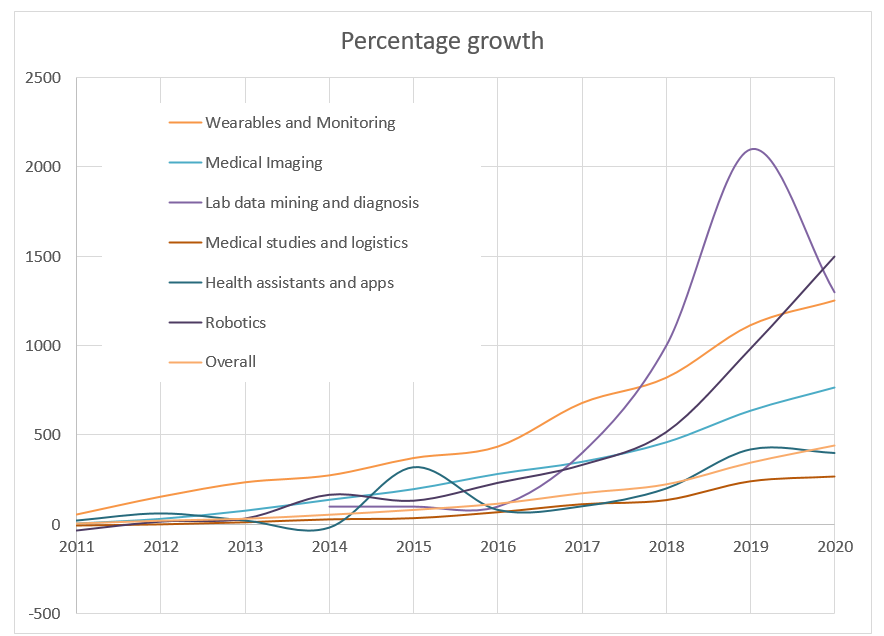 The above graphs illustrate the rapid pace of innovation in AI in HealthTech across the healthcare subsectors and the significant use of the patent system by HealthTech companies looking to protect and scale their AI-driven technologies.

The AI in Health and Care Award is a £140 million fund awarded by NHSX and available for companies developing promising new technologies relating to AI in healthcare.  The funding for the companies successful in the first round of competition was awarded in September 2020.  Below we look at the patent filing strategy used by one of the winning companies, Aidence, who are based in the Netherlands.

Aidence, who have developed AI-driven solutions for the oncology pathway, particularly for lung cancer screening, filed a patent application initially in the Netherlands in 2017, for a method which they have developed using a deep neural network to process 3D image data.  They succeeded in obtaining a granted Netherlands patent after just 18 months – an extremely short application process, considering the average time to grant at the European Patent Office is between 3 and 4 years.  Based on the initial local application, Aidence used the priority system to file an International (PCT) application, and extend their pending patent protection to Europe, Canada, China, Japan, and the USA.

This is a common filing strategy adopted by early-stage companies – filing an initial, relatively low-cost priority application before filing an International application at 12 months from filing to delay the decision regarding the final jurisdictions to seek protection in, and the associated costs, to 30 months after the original filing date.

For early-stage companies, funds are often relatively tight when a first application must be filed – often because of plans to disclose aspects of the technology – so a relatively low cost national application, for example by filing at the UK IPO, provides a cost-effective way to secure a filing date for their invention.  However, although it can be tempting to keep costs low as possible at this stage by effectively filing a “placeholder” application with limited description, we would always advise ensuring the application has been drafted as thoroughly as possible, with sufficient description and the invention clearly thought through and defined in the claims.  This slight time and cost investment in the initial drafting process lays the foundations for strong protection to be sought later – and not doing so can have serious implications for the later applications.

This strategy also has the advantage that the initial application provides an early indication on patentability from the national office at which the application is filed – in the case of Aidence’s application, the Netherlands Patent Office.  Here Aidence benefitted from a very positive initial search report from the Netherlands patent office, which can be of real value to early-stage companies seeking investment to demonstrate to investors that the company is likely to secure protection for their technology.

However, even if the patent office does not issue a clear search report, it will provide useful information on the “prior art” – the most relevant prior publications found in the patent office’s search – which can shape the strategy and improve the understanding of the scope of protection that might be achievable.  In the vast majority of applications there will be at least some objections from the patent office to the claimed invention – this is to be expected when the invention has initially been defined as broadly as possible and, more often than not, there is a route through the objections to grant.  We have found that the early-stage companies we work with have benefited from us preparing a statement providing our opinion on the search results and likely scope of protection obtainable.  This can help potential investors understand the search report and demonstrate that the company is in a stronger position with the new knowledge of the prior art and confidence in the protection that can be achieved.

The next stage in the strategy is to file an International application at 12 months from the original filing date to provide the option for seeking protection in almost any country in the world.  When filing the PCT is it essential to take the opportunity to strengthen the application by taking into account the prior art and objections raised in the search of the earlier application.  After filing the PCT, there is a period of 18 months before the final decision must be made regarding the countries to seek protection in.  Since filing in multiple countries can be expensive, and the points at which the costs fall less predictable, this 18 month period provides time for the company to seek funding that can be used to support the extension of protection into other jurisdictions.

Once the PCT application is converted into the “national phase” applications in the countries of interest (in Aidence’s case, Europe, Canada, China, Japan, and the USA) the applications may proceed at different rates and not all patent offices will take the same view of the application.  Aidence’s application is still currently pending at the European Patent Office (EPO).  As described in the first article in the series, ““You can’t patent algorithms” – A Guide to Identifying and Protecting AI Inventions in Healthcare“, the EPO takes a specific approach to assessing AI inventions and in order to succeed with the application under European practice, they will need to argue that the claims include new technical features which contribute to solving a technical problem in the field.  This indicates the importance of the initial drafting process and being aware of the approach taken by the various patent offices when filing the initial application.

This strategy places Aidence in a strong position to secure valuable protection for its technology, but this is just one example of a possible patent filing strategy to support the successful scaling and commercialisation of a new AI-driven HealthTech technology.
There are a diverse range of technologies and implementation plans being used by the large number of successful companies driving the innovation in this field – and there are an equally diverse range of IP strategies to support them.  The important point is that the IP strategy should be developed with the specific technology, business plan, and objectives in mind.

If you would like to know more about the trends discussed in this article or if you would like to explore possible IP strategies to protect your innovation, please contact our specialist team at medtech@gje.com to arrange a free IP consultation. 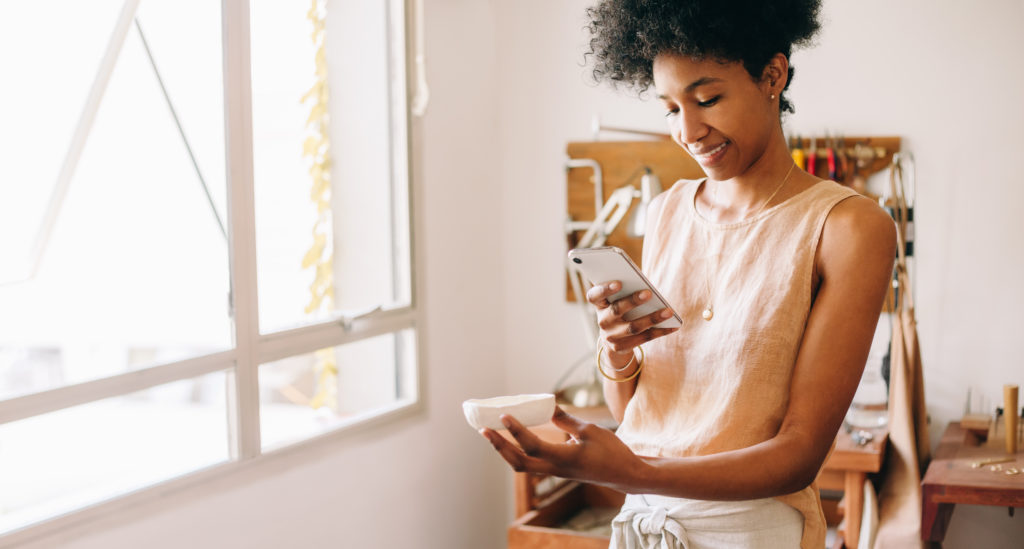 Registered designs are a cost-effective form of IP protection that enables the physical appearance of a product to...